On October 6, 2020, the Coordination Meeting of the Chief Narcologists of the CSTO member states was held in Moscow 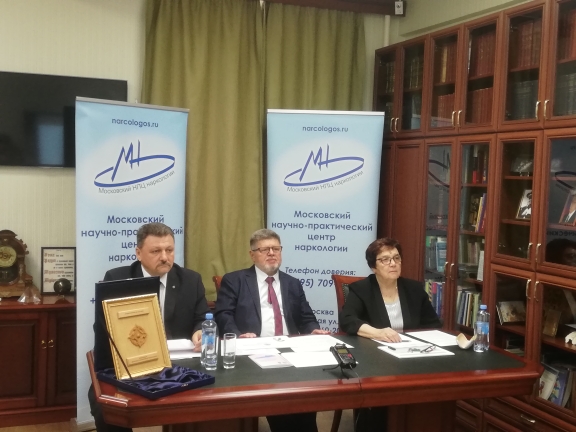 On October 6, 2020, the Coordination Meeting of the Chief Narcologists of the Collective Security Treaty Organization (hereinafter —CSTO) member states was held in Moscow. Taking into account the epidemiological situation, the meeting was held in a mixed mode using videoconferencing.

Chairman of the Coordination Meeting of the Chief Narcologists of the CSTO member states E.A. Brun, the chief external psychiatrist-narcologist of the Ministry of Health of Russia, chief external specialist psychiatrist-narcologist of the Moscow Department of Health, President of the Moscow State-Financed Health Institution of the city of Moscow "Moscow Scientific and Practical Center for Narcology of the Moscow Department of Health", greeted colleagues - organizers of drug treatment and heads of medical organizations for drug treatment in the CSTO member states.

M.G. Melikhov, the Adviser to the CSTO Secretariat, the Deputy Secretary of the Coordinating Council of the Heads of Competent Authorities for Countering the Illicit Drug Trafficking of the CSTO member states, conveyed greetings from the CSTO Secretary General S.V. Zas. In his report “On Countering Challenges and Threats in Modern Conditions”, he presented the main directions of the development of the drug situation in the CSTO member states and listed measures to counter drug trafficking.

Acting Head of the Division for International Cooperation in the Field of Drug Control of the Department for New Challenges and Threats of the Ministry of Foreign Affairs of the Russian Federation M.N. Visloguzova in her report “Key aspects of the position of the Russian Federation in the field of drug control” noted the CSTO's contribution to strengthening bilateral and regional ties in the field of drug control. She welcomed the adoption of a new five-year CSTO strategy, which was aimed at deepening cooperation between our countries. The representative of the Russian Foreign Ministry thanked the partners for active interaction at international and regional platforms, primarily within the framework of the UN Commission on Narcotic Drugs (hereinafter - CND). In the near future, the CND's agenda is to vote on the recommendations of the Expert Committee on Drug Dependence of the World Health Organization on the scheduling of cannabis. She presented the initiative of the Russian Federation to adopt an official document on the impact of the coronavirus pandemic on international drug control at the 64th session of the CND to be adopted in April 2021. The Russian Federation, within the framework of project work with the United Nations Office on Drugs and Crime (hereinafter referred to as UNODC), has a solid package of projects in various directions, in which, among other things, an emphasis is placed on promoting a healthy lifestyle and preventing drug use among young people. The representative of the Russian Ministry of Foreign Affairs noted the efforts to clarify the approaches of the Russian Federation to the introduction of domestic methods of drug dependence treatment without the use of methadone. In this context, she drew attention to the fact that in 2019 the European Court of Human Rights did not see any violations of human rights and international legal obligations of the Russian Federation in the prohibition of the use of methadone in the treatment of drug addiction, which it reflected in its decision. Thus, there was recognition of Russian approaches to the treatment of drug-addicted persons.

J. Milsom, the UNODC Representative in the Islamic Republic of Pakistan, Senior Coordinator of the Regional Program for Afghanistan and Neighboring Countries, in the report “On the UNODC Regional Program for Afghanistan and Neighboring Countries. About the current drug situation in Afghanistan” spoke about the mandate of the UNODC, which allows overseeing a very wide range of issues related to drugs. He described the current drug situation in Afghanistan, where, in addition to the cultivation of opium poppy and the production of heroin, the population established the production of drugs of synthetic origin. In addition, UNODC recorded that the COVID-19 pandemic restricted drug trafficking, made it difficult to move between countries, made it difficult to transfer large sums of money, and also disrupted drug treatment of drug addicted persons.

A.Yu. Evdokimov, the Head of the Department of Mental Health, Prevention and Treatment of Addictions of the Department of Public Health, Communications and Expert Activity of the Ministry of Health of the Russian Federation, welcomed the participants of the meeting and noted that the Coordination Meeting of the chief narcologists of the CSTO member states was a good platform for the exchange of experience in the prevention of substance dependence disorders and their treatment. Our countries border on each other, we have a common history of the development of drug abuse treatment services, common approaches to the organization of drug treatment, which facilitates mutual understanding in medical matters. At the same time, every country, every nation has its own unique ways to cope with drug addiction problems. Consolidation of efforts in this area is especially important given the massive migration processes between our countries. The Russian Ministry of Health is doing a lot of international work, showing openness to cooperation and showing readiness to consider constructive proposals for cooperation on a variety of medical issues. In addition, he noted that E.A. Brun was one of the most experienced specialists in the field of narcology, and the Moscow State-Financed Health Institution of the city of Moscow "Moscow Scientific and Practical Center for Narcology of the Moscow Department of Health" had long become a reference platform for the design and development of prevention of substance dependence disorders and treatment of drug addicted persons.

E.A. Koshkina, the Chief Researcher at the Moscow State-Financed Health Institution of the city of Moscow "Moscow Scientific and Practical Center for Narcology of the Moscow Department of Health", in her report "Analysis of the drug situation in the CSTO member states" presented an analysis of the information received from the chief narcologists of the CSTO member states about the units of the medical service in which drug treatment was provided, about the overall and primary disease incidence of various substance dependence disorders.

Further E.A. Brun, Chairman of the Coordination Meeting of the Chief Narcologists of the CSTO member states, described a systematic and comprehensive approach to the providing drug dependence treatment in the Russian Federation and noted that after his report in Vienna at the UNODC event in Vienna, Russian standards for the treatment of drug addicts were implemented into international standards for providing assistance to drug addicted persons.

M.G. Melikhov added that within the framework of the chairmanship of the Republic of Tajikistan in the CSTO in 2021, there was a proposal to hold the next Coordination Meeting of the chief narcologists of the CSTO member states in Dushanbe.

A.V. Khodzhaev, the Chief Specialist of the Department for Organization of Health Care of the Main Department for Organization of Health Care, Expertise, Appeals of Citizens and Legal Entities of the Ministry of Health of the Republic of Belarus, reported on the main aspects of the work of the narcological service of the Republic of Belarus, the prospects for its development and priority tasks, especially drawing attention to the need to actively identify drug users "Gray zone", i.e. latent, "invisible" for the drug abuse treatment service. He also briefly dwelled on the difference in the assessment by the health authorities and the internal affairs bodies of the prevalence of drug use among the population.

In the report by R.B. Tokubaev, the Director of the Republican Narcology Center of the Ministry of Health of the Kyrgyz Republic "Narcological Service of the Kyrgyz Republic", special attention was paid to the continuation of the provision of drug abuse treatment during the COVID-19 pandemic and the need to make some changes to the regime of the drug service and its structure. His presentation also reflected the peculiarities of the use of various drugs in different cities and regions of the Kyrgyz Republic, the dynamics of the incidence of alcohol and drug addiction, alcoholic psychosis, the principles of treatment and assistance to drug addicts, including those with associated infectious diseases.

In general, the Coordination Meeting of the chief narcologists of the CSTO member states showed that the comprehensive approaches to the provision of drug treatment, previously incorporated in the public health system, made it possible to identify drug addiction disorders and provide the necessary treatment for the distribution of any psychoactive substances. Practically everywhere there are positive trends in the reduction of morbidity associated with the use of alcohol and opium drugs, in the presence of alarming trends in the increase in the use of synthetic drugs.


Back to the section

Back to the all news